Sifu Ko Kin was one of the late great Wong Shun Leung’s early students and served as the coach at the Wing Chun Athletic Association. 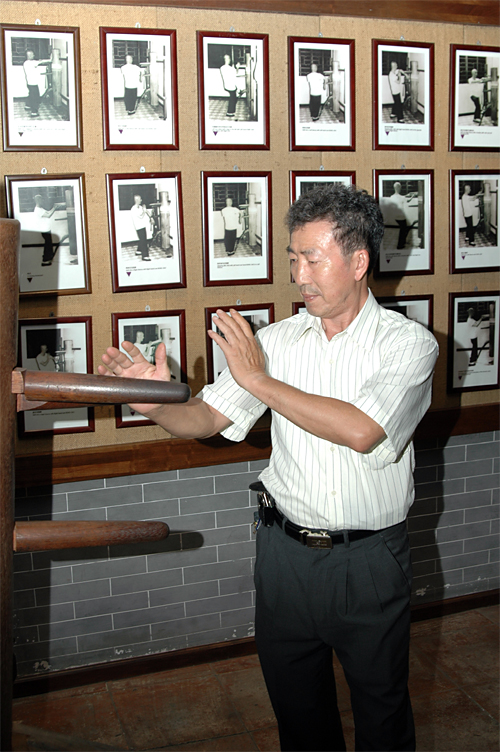 He was introduced to Sifu Wong Shun Leung by Wan Kam Leung more than forty years ago. At that time, Sifu Wong had just begun teaching and was testing his skills with semi-private matches.

Ko Kin believed that there were two main principles that he consider to be most important in Wing Chun. Sifu Ko Kin is quoted from John Smith’s 1998 interview for http://www.wongvingtsun.co.uk:

“One is the punch, it is the most direct method to hit an opponent and the attack is paramount to prevent him from countering you. Next is the stance, as you need to chase aggressively, so it is difficult for your opponent to maintain balance and composure. Do not give the opponent any opportunity to attack you. There is no need to just block and then hit, it needs to be done at the same time. These movements are very direct and do not resemble what is seen in the movies. Ving Tsun is a real style for fighting and is not used for any flashy demonstration.”

The Effectiveness of Chi Sau

Because there are many variations of Chi Sau, Sifu Ko Kin felt that it is an important drill to be used for real life fighting. In his words:

“It also promotes a habit to develop instinctive reactions to your opponent’s force. Some people in other countries I have heard practice Ving Tsun and place little or no importance on Chi Sau and instead use set routines, maybe they do not really understand Ving Tsun and they should really be doing something else. Chi Sau is not used for planned attacks and defenses. It is used in a situation where anything and everything can happen. You should not need to think about what you are going to do, but to merely feel your opponent’s force, deflect it and penetrate through to your opponent. Do not follow your opponent’s hands, but follow your opponent with your punches.”

Ko Kin reported on Wing Chun footwork straight from the Wong Shun Leung rulebook. He said footwork should only be used for controlling the enemy, disrupting his balance and then attacking using the hands.

“Never give your enemy any chance.” – Sifu Ko Kin